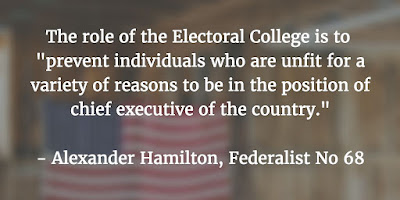 Published on Dec 8, 2016
A New York firefighter is facing arson charges after he allegedly set his own home on fire and then blamed the fire on #BlackLivesMatter. Cenk Uygur and Ana Kasparian of The Young Turks break it down. Tell us what you think in the comment section below. http://www.tytnetwork.com/go

A Primer on FBI Trump Electioneering with storyline and sources

There has been continuing discussion in the Kos Community on the role of the FBI in tipping the election to Trump.  www.dailykos.com/...  .  I had previously written that the FBI intervention, ( defined as Comey’s letters, FBI anti-Clinton leaks, and other anti-Clinton FBI actions) was decisive in the election. www.dailykos.com/...   Decisive means the FBI intervention changed what looked in late October like a modest Clinton victory (according to CNN Exit Polls) and a Democratic Senate majority into a split decision for Trump and a Republican Senate majority.  Obviously, there were many other reasons why Clinton was only slightly ahead at the end of October.
The belief that the FBI election intervention was decisive now seems like old news ( many have come to the same conclusion including Paul Krugman and Markos "kos" Moulitsas in his legendary post-election screed and others).  My FBI analysis is different.  I don’t believe Comey was the only problem.  I believe what happened was a deep partisan intervention in the election by a significant portion of the Agency. Further, while Comey’s removal might be called for it would not necessarily prevent partisan FBI electioneering from happening again and would in the short term impede a more thorough investigation. 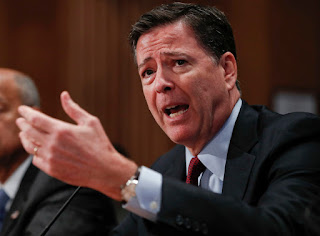 Stephen King knows incompetence when he sees it

Stephen King and I are not psychiatrists but know a nut when we see it. 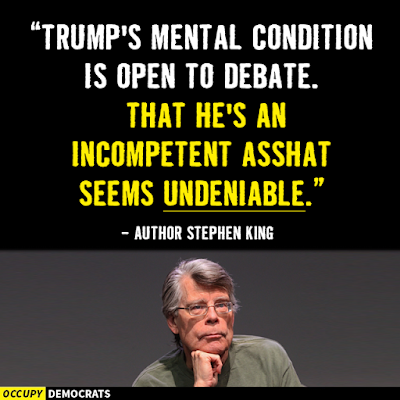 Team Of Evils: Trump’s EPA Pick Not So Big On ‘Protecting’ So-Called ‘Environment’

Sure, we’ve already described the nascent Trump administration as a Lovecraftian horror, forming itself from a twisted concatenation of the very worst unholy abominations like some sort of sludge-creature in a late-night horror movie. But now Trump’s somehow managed to top himself, choosing as his nominee for administrator of the Environmental Protection Agency Scott Pruitt, a man whose entire career has been the very antithesis of the first two words in the name of the agency Trump wants him to run. You can’t say Pruitt is in the pocket of Big Oil — it’s more like he wears Oklahoma’s oil and gas extraction industries as a second skin. Which he rubs heavy crude into willingly, with no fear of getting the hose. Pruitt’s appointment as EPA administrator makes Ronald Reagan’s secretary of Interior, James Watt, look like John Freakin’ Muir. Just how bad is Pruitt? Former Obama advisor Dan Pfeiffer has some idea:

Another Pay to Play Trump cabinet pick.
Donald Trumps appointees and cabinet picks don't tap America's best and brightest but seem to be for sale to the billionaire who was most aggrieved by an agency, to punish and dismantle as they see fit. 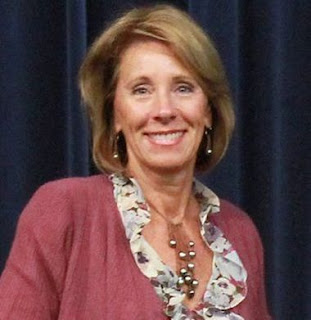 As Michiganders know, Betsy and Dick DeVos are religious and school privatization/choice/voucher zealots. They were humiliated by the twin failures of voucher legislation in 2000 and Dick’s loss in the Michigan governor’s race to Jennifer Granholm in 2006, and these dual humiliations resulted in the development of the DeVos’ “long-game” strategy to achieve their goals of privatizing public education:
Based on what we know about her beliefs regarding education, Ms. DeVos’ ultimate goal, as I wrote about in a recent Eclectablog post, appears to be:


a two-tiered educational system:
One, a system of elite private and religious schools for well-to-do, mostly White parents with the means to afford expensive tuition payments, staffed by qualified, certified teachers, with a rich curriculum based on face-to-face instruction in clean, safe, well-maintained schools…
The other, a parallel system of “fly by night” virtual and online “schools” that open and close seemingly at random, and for-profit charters operated by scam artists like Northern Michigan’s Dr. Steve Ingersoll, with little to no state or federal regulation or oversight, and a bare bones, “back to the basics” curriculum delivered by unqualified and uncertified “teachers”.

The timeline below offers a narrative sketch of some of the pivotal events and influences that have shaped Ms. DeVos’ views on education over the years, and provides a context for what her policy stances and positions are likely to be as Secretary of Education.
Read Full Article Here

How the DeVos got so rich? They are the ultimate Amway salespeople. The tippy top dogs of multi level marketing giant, Amway. In my humble opinion that makes them exploiters of others and complete souless assholes.

Linda McMahon.
Her qualifications for the job?
She gave the Trump foundation 5 million dollars,
Her family foundation was one of the largest contributors to the Trump campaign.
2 failed senate runs and in another Trump twist of irony, McMahon seems more qualified than education pick Betsy De Vos  to run the dept of education.. McMahon actually served as an appointee to Connecticut's board of education. She resigned, not being able to fundraise and lobby for her political preferences.

Donald Trumps appointees and cabinet picks don't tap America's best and brightest but seem to be for sale to the billionaire who was most aggrieved by an agency, to punish and dismantle as they see fit.