Is Trump begging us to put him out of his misery?

He's in way over his head and realizes that he may actually need to work at the President thing.
I'm really starting to believe his behavior is his plea for help. He changed his mind but can't admit he is wrong...ever!

So whats a poor president elect to do? 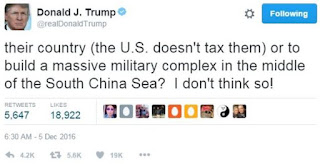 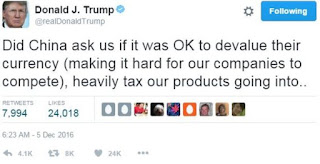 Mess with China before he takes the oath of office.

He's tried everything else to get out of being President.
Lets hope the electoral college is listening to him.

WTF ~ The hacking of journalists and not just Keith either. Please watch.

BBC News - ‎12 hours ago‎
The US Army has decided not to allow an oil pipeline to cross under a reservoir on land it controls in North Dakota in a move praised by protesters. The Standing Rock Sioux Tribe hailed an "historic decision" and said it was "forever grateful" to ... 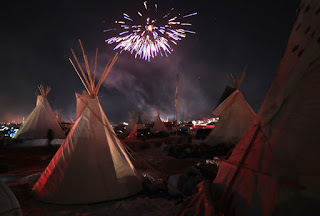 Some of you will recall Evan McMullin as one of the three major alternative candidates in the 2016 presidential election, after the Libertarian Party’s Gary Johnson and the Green Party’s Jill Stein. As a mainstream conservative Republican, and as a Mormon, he was an attractive candidate for some.
Full Article

Evan McMullin Retweeted Brian Koppelman
.@briankoppelman: If Trump governs as an authoritarian like he has promised, it will be critical that Americans do the following 10 things:

If Trump governs as an authoritarian like he has promised, it will be critical that Americans do the following 10 things:
1. Read and learn the Declaration of Independence, the Constitution, and the Bill of Rights. Know that our basic rights are inalienable.
2. Identify and follow many credible sources of news. Be very well informed and learn to discern truth from untruth.
3. Watch every word, decision and action of Trump and his administration extremely closely, like we have never done before in America.
4. Be very vocal in every forum available to us when we observe Trump's violations of our rights and our democracy. Write, speak, act.
5. Support journalists, artists, academics, clergy and others who speak truth and who inform, inspire and unite us.
6. Build bridges with Americans from the other side of the traditional political spectrum and with members of diverse American communities.
7. Defend others who may be threatened by Trump even if they don't look, think or believe like us. An attack on one is an attack on all.
8. Organize online and in person with other Americans who understand the danger Trump poses and who are also willing to speak up.
9. Hold members of Congress accountable for protecting our rights and democracy through elections and by making public demands of them now.
10. And finally, in the words of Abraham Lincoln, have "malice toward none, with charity for all" and never ever lose hope!

There’s little to stop the attorney general nominee from ignoring the will of millions of pro-pot voters.

Theodore Roosevelt on freedom of speech 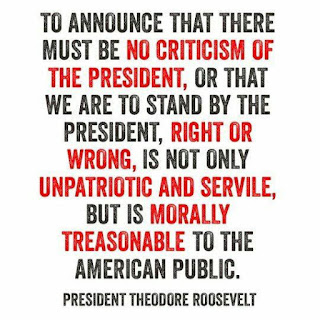 Blackwhite is defined as follows: 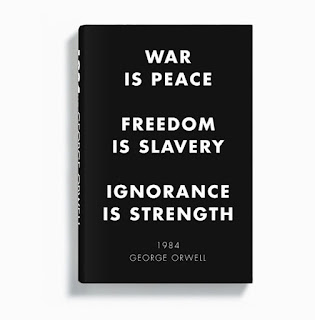 Mr Ryan don't care, as long as he brings his masters your Social Security and Medicare.