“We’re going to need to stay here and fight, and not just politically in four years when he’s up for reelection, but constantly, monitoring legislation as it moves through Congress, and fucking voting when your legislators come up for reelection in two years,” Oliver said. “But that is still below the barest minimum of what is going to be needed.”

Have hope. Never give up. 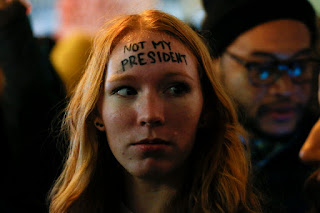 On Friday, January 20 in Washington D.C., Donald Trump will be sworn in as the nation’s 45th president. The next day, a demonstration that aims to bring a million women and feminists to the nation’s capital will formally protest his inauguration as commander-in-chief. The idea for the mass protest, which will see marchers begin at the Lincoln Memorial and finish outside of the White House, is nascent — basic plans for the demonstration began popping up on Facebook within the last 24 hours. It appears the organizers are launching Facebook groups in individual states — so far 16 states have pages on the social media network. Organizers seemed to have some technical difficulties with the national page, so one of the local pages has been converted to what will now served as the national page.Read More

Be careful what you say

Senate Minority Leader Harry Reid on Friday had said that "the election of Donald Trump has emboldened the forces of hate and bigotry in America" and that "white nationalists, Vladimir Putin and ISIS are celebrating Donald Trump's victory, while innocent, law-abiding Americans are wracked with fear." [...]
Then, she added: "He should be very careful about characterizing somebody in a legal sense. He thinks -- he thinks he's just being some kind of political pundit there, but I would say be very careful about the way you characterize it."


Reid's office was eager to respond.


“It only took five days for President-elect Trump to try to silence his critics with the threat of legal action. This should shock and concern all Americans. [...] Since Trump was elected, acts of hate against Muslims, Jews, women and people of color have spiked dramatically. The KKK is planning a parade to celebrate Trump’s victory because the KKK sees Trump as their champion. Today, a headline in one newspaper reads, ‘Popular neo-Nazi site urges readers to troll liberals into suicide,’ while another reads, ‘Post-election spate of hate crimes worse than 9-11.’
“But instead of rising to the responsibility of his office, Trump is hiding behind his Twitter account and sending his staff on TV to threaten his critics.
“If this is going to be a time of healing, Trump must take action immediately to stop the acts of hate and threats of violence that are being committed in his name across the country. Trump owes the nation leadership, not petty attempts to silence his critics.”


I am looking for the direct quote from Donald Trump, threatening a retired United States General with repercussions about statements regarding Trump. I'll find it but the pile of BS is growing everyday. Check back.

We still have a rouge FBI operating. I am assuming the FBI is already hard at work collecting information on whom to deport come inauguration day. We may never know the true extent of the role the FBI played in the election of Trump. Ignoring Russian influence to talk about irrelevant emails. Influencing the election so that the unthinkable has happened, a Trump presidency. Does Comey see it as a chance to rule the USA via mentally ill puppet? Pick a crazy ass theory...any crazy ass theory....you could well be correct.
Guess we're all going to find out the hard way.
All clandestine services will be at Trumps fingertips shortly and he does not have to be covert after that.

We should expect to be under constant surveillance during Trump's presidency. It should not deter you from speaking your mind and speaking out about all the un-American things coming down the pike. We suggest you take steps to at least makes it more difficult for you to be tracked.. In this day and age it is nearly impossible to erase your electronic footprint. We have a few suggestions to help reduce your exposure and are looking for more. Feel free to leave anon ideas in comments.

https://www.torproject.org/
Tor is a free software that prevents people from learning your location or browsing habits by letting you communicate anonymously on the Internet. It also helps .

Things to Know About Web Security Before Trump’s Inauguration: A Harm Reductionist Guide

You might want to start weaning yourself off social media. Send the people who truly matter to you your phone number and your mailing address.

You may want to distance yourself from people you know voted for Trump. It is very likely you could get narced on. If you are assisting people directly...use extreme caution. It does seem there soon could be actual American citizens incarcerated as political prisoners.

Good luck, stay safe and never give up.

Petition: Call on President-elect Trump to Condem Hate Crimes done in His Name